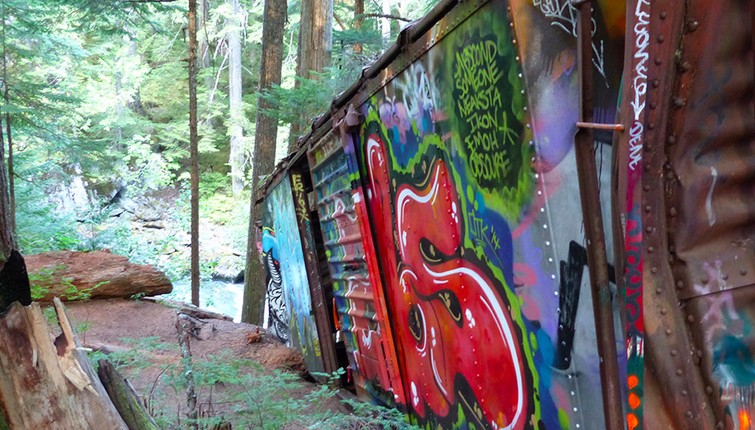 Trainwrecks and rainbows. Confessions of an Ad Guy.

I’ve been in the ad business a long time and I’ve always loved it. Where else can you work in…

I’ve been in the ad business a long time and I’ve always loved it. Where else can you work in three different industries in a single day. Plumbing fixtures in the morning, enterprise software for lunch and beer in the afternoon.

I’ve spent most of my career in Austin, Texas. I got here from LA in 1994 just in time for the internet. I clearly remember the first day I used email in my agency. What a miracle. And I remember my first spam email. I responded to them letting them know they got the wrong person, thank you.

Austin started exploding with technology companies around that time and I watched internet startups crop up daily and it always seemed to be a mad rush to be first to market with the next big idea.

It was a great time to be in Austin. The traffic didn’t suck yet and there were spark flying everywhere. Someone will write a book about this time and I’ve got boxes of branded promotional goodies my agency designed for many of these startups.

Because it was such a mad race to get to market, a lot of crazy stuff happened and I was lucky enough to be right in the middle of much of it.

I had a big enterprise software client that was notorious for hiring the smartest grads from the top schools. They’d throw a lot of money at these kids, amp them up on a full 7-11’s worth of junk food in a massive break room and give away Porsche’s at trade shows.

I was in their office meeting with the Marcom Director on a project when someone came in petrified in fear. They’d spent $50K designing a beautiful invitation inviting thousands to an upcoming high dollar event. The whole thing was very impressive save for one tiny detail.

The invitation didn’t have the date. No date at all. You’re invited to this amazing event and boy we sure wish you’d come but we’re not going to tell you when it’s happening.

I asked her if she’d knew the cost of an overnight Fedex (which at that time was around $15 each, times thousands). She had no idea. I told her. It wasn’t pretty.

I was in their office another day when I spied a kid going through a huge pile of response cards from last week’s trade show. They were giving away a Porsche at the show. He was clearly frustrated at the quality of these “leads.””These are, like students and assistants and stuff.” Clearly not decision makers who would spend a million dollars on an enterprise solution.

I couldn’t help but interject, “You’re right. Those aren’t CIO’s. Those are people who want a free Porsche.”

I pitched a startup on a complete branding process for their new company. The guys were obviously pretty smart and the company had all the markings of a startup. Nothing on the walls and Dell boxes everywhere. They may not have had a clear understanding of American culture judging from their thick accents. I’d been hired many times to name companies and products but they already had a name and they were going with it.

I told them it sounded like someone in black leather with a whip. They were not amused. I didn’t get the job. But it does reinforce the concept that before you put up something on your church sign, run it by a 14 year old boy.

I did some free stuff for a startup that was put together by a couple of my musician friends. It went public. They gave me stock. I bought a house.

I had a client that was a partner to a big local company. The big local company was having a users conference/tradeshow here in Austin and the minimum cost to be a sponsor was $60K and that got your name on bus seats that took the couple thousand attendees to a concert across town. They asked me what else $60K could get them.

I had some fun with this one.

We hired a booze stocked party bus to pick people up at the airport. We posted a guy at the airport with a big sign for the event and he handed out goodie bags including a lanyard that got you free shuttle transportation to the event and around town for the duration of the show.

We chose a route to the convention center and bought up every billboard for the month with our client’s message. It looked like our client owned the whole city.We covered the sidewalk around the convention center with their message with chalk. We gave out drink coupons to the local bars and every one had our banners hanging inside.

We hired a guy to buzz the VIP golf tournament in a biplane towing a 60 ft banner which prompted the CEO of the big company to complain that he hated us but he wished he’d thought of that.

And we made the event coordinator with one of the world’s biggest technology companies cry. They’d sponsored that concert and we stood outside sticking big glow-in-the-dark buttons on everyone who went in. It’s the only thing you saw as you looked into the huge, dark arena. A sea of our taglines, glowing like a million points of light.

She was furious. She’d paid around $100K for the event and we owned it for a buck a pop.

People came by the client’s booth assuming they had put on the whole event.

I did an ad for a startup called iChat. Yes, it was chat software. The image was Churchill, Stalin and Roosevelt sitting in a courtyard in Yalta in what became known as The Yalta Conference, discussing the division of Europe after the end of WWII. It was a beautiful, stark black and white photo and the headline was “Never underestimate the power of a little chat.”

To this day, it’s still my favorite ad.

I had a terrible client. I had presented a great campaign to all the company executives who just didn’t get it. I told them then obviously they should hire another agency and I’d be happy to give them recommendations.The CEO begged me to stay. I was right, it’s a great campaign. We want to keep you as our agency… OK, I’ll stay (but I had major bad juju about it).

The CEO fired me a week later. It just had to be his idea.

I had a spinal hardware company who’s original logo was a silhouette of a person with the curve of a complete spine. It was terrible. And to top it off, the little register mark, the “R ball” was at the bottom of the spine.

I’m in the conference room pitching to the executive committee that they should hire my agency for their rebranding and behind me was this logo, painted on the wall around six feet tall. I was getting nowhere until I just turned around, pointed at that anatomically correctly placed R ball and just said it.

The room went a bit shocked until someone said, “Oh my god, he’s right.”

We did the redesign and it was beautiful and they got bought up by a much bigger company with internal marketing resources and we lost the client.

I had designed a lot of annual reports over the years. Once the CEO changed the colors on the cover because his wife painted the bathroom that color and he hated it. Another time, the CEO insisted that the illustration on the cover be done by his brother’s son. It sucked and that’s where the phrase “Nephew Art” came from.

We pitched what would become the first free city web site. It was going to be a production of the local newspaper, The Austin American Statesman.

This was around 1996 and nobody knew how it would make money. Could you sell ads on a web site? Would people use this new interwebs thing to find out what’s going on in town? Would anyone care?

My agency got invited to pitch against a half dozen other Austin agencies and I cooked up a plan.

I’d drawn up 50+ ideas. Big sketches on newsprint paper. Headlines, drawings, ideas. It painted a pretty complete picture of how we’d make a real brand for something so new that nobody knew where it’d go. They’d brought in a dozen execs from around the country for the pitches and I’d timed it so we finished right at noon. The last headline was “More links than Elgin sausage.”

That was the signal for the doors to fly open and the rest of our crew to bring in 50 lbs of great Texas BBQ. All the executives ate and ate and ate and the whole building smelled like BBQ. We cleaned up after an amazing lunch and shook hands and left.

The next agency, who was our biggest threat, came in at 2:00 and gave their pitch. We got the account.

A couple years later I asked the head of marketing how that next pitch was. “Oh hell, I can’t even remember. Everyone was so full and tired that I don’t think anyone paid attention…”

My office at the time was overlooking Lake Austin and the 360 Bridge. The client was set on calling the new venture Austin Cyber Limits but the lawyers from Austin City Limits would have none of it so it was up to me to come up with a name. I sat there looking at that damn bridge… Austin 360… Get Around Austin… Now when I go to the Austin 360 Amphitheatre I feel like I should get free tickets or something.

I’m just scratching the surface of my life in adverting. If you want to get into this business, I’d be happy to try to talk you out of it. The hours are long. Every day you have to make something out of nothing. Starting out, you’ll make lousy money because so many crazy people are dying to be Darren Stevens when they grow up.

But if I can’t talk you out of it, you’ll love it. It’s easier on your back than digging ditches.