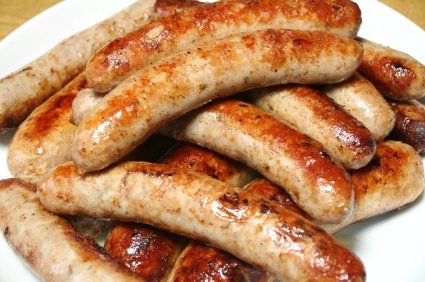 The Pitch and the mountain of sausage.

I love a good pitch. As an Ad Guy, there’s nothing more fun in this business than to pitch a…

I love a good pitch.

As an Ad Guy, there’s nothing more fun in this business than to pitch a new client. There’s the competition, the short timeframe and the great theatre of presenting ideas. It’s my favorite part of this business.

I’ve done hundreds of pitches over the years and one of my favorites happened around 1996 here in Austin. Think back if you will to 1996. The internet was pretty young. Not a lot of sites out there and everyone was trying to figure out what was going to happen. One wildly popular site was ‘The Coffee Pot.”

It was a cam set up aimed at an actual coffee pot at the University of Cambridge that allowed everyone in the building to see if there was coffee. I remember going to the Web site and sure enough, there was a fuzzy greyscale image of a coffee pot. Every so often a hand would reach in and pick it up. Nobody knows how many millions of people watched that coffee pot. It was eventually sold at auction for over $5000.

Needless to say, we early Web users were starving for content.

So it was against this backdrop that my agency was contacted by the local paper, The Austin American-Statesman.

They were building something entirely new.

A Web site for the city of Austin.

It was going to have everything you’d want to know about Austin. Events, music, entertainment, news etc. Only one city on earth had such a thing and that was Atlanta, but you had to pay to be a member.

This was going to be free. Funded, they were thinking, by advertising.

New ground. Nobody knew what would happen. How would the business model work? Would people go to a Web site to see what’s going on in town? Would anyone care? Would it take business away from the newspaper? Could they even sell ads?

So they needed a creative agency to launch this new idea so they contacted a half dozen local shops. My agency was one and we found out who we were pitching against.

There were meetings. There was research. There was the gnashing of teeth. But in the end, there had to be big ideas for something entirely new.

I picked the day and time for our pitch. I figured I’d want around an hour and a half, so I set it for the magic hour… 10:00 AM.

That’s my favorite time for a pitch. Everyone has had some time to get a few things done, make some calls, put things in order, get some coffee and be bright and alert.

The parent client, Cox, was based in Atlanta and they flew in a whole contingent of executives. Overall, we had maybe 15 from the client in to see our pitch. We were to start at 10:00 and they’d break for lunch. Then the next agency was our biggest threat and they would come in around 1:30.

I figured the other agencies would bring in a lot of studies and graphs and charts and maybe some creative. Nice, tight comps of a handful of their best ideas, printed in color and mounted on nice black boards. Think Mad Men.

I wanted to do something different. And I had an evil plan.

Instead of a boring report or a slide show or a lot of account people blathering about studies or facts and figures, I wanted to bury them in ideas. AND I realized our biggest threat was pitching right after lunch so I wanted an unfair advantage. Afterall, all’s fair in love and war and creative pitches.

All these ideas were drawn out quickly on big sheets of paper. Felt pen on cheap newsprint. I ran around the room, putting up one idea at a time. After a while, the whole room was a mess of ideas. I covered windows, doors, every piece of wall. Each new idea would elicit a response, a laugh, a comment. I timed it so I’d put up the last idea right at 11:30.

That last headline was “More links than Elgin Sausage.”

If you’re an Austinite, you know Elgin Sausage.

They laughed. They loved it. And it was the signal for the rest of my crew to burst into the conference room with a mountain of BBQ.

We covered the table with food. Brisket, ribs, slaw, iced tea and of course, sausage. The room was filled with the smell of great Texas BBQ and everyone was thrilled. We ate and ate and ate and talked and laughed and had a fine, huge lunch.

Then we packed up everything and bid them adieu.

The next agency came in a half hour later.

Needles to say, we got the account and made it a genuine success. I even changed the name from Austin Cyber Limits (someone shoot me) to Austin360.com.

A few years later I asked my lead contact who was in all the pitches how the agency after us did that day (remember, they were our biggest competitor).

“Oh man, we were all so full I don’t think anyone heard a word they said…”

Remember, all’s fair in love, war and The Pitch.