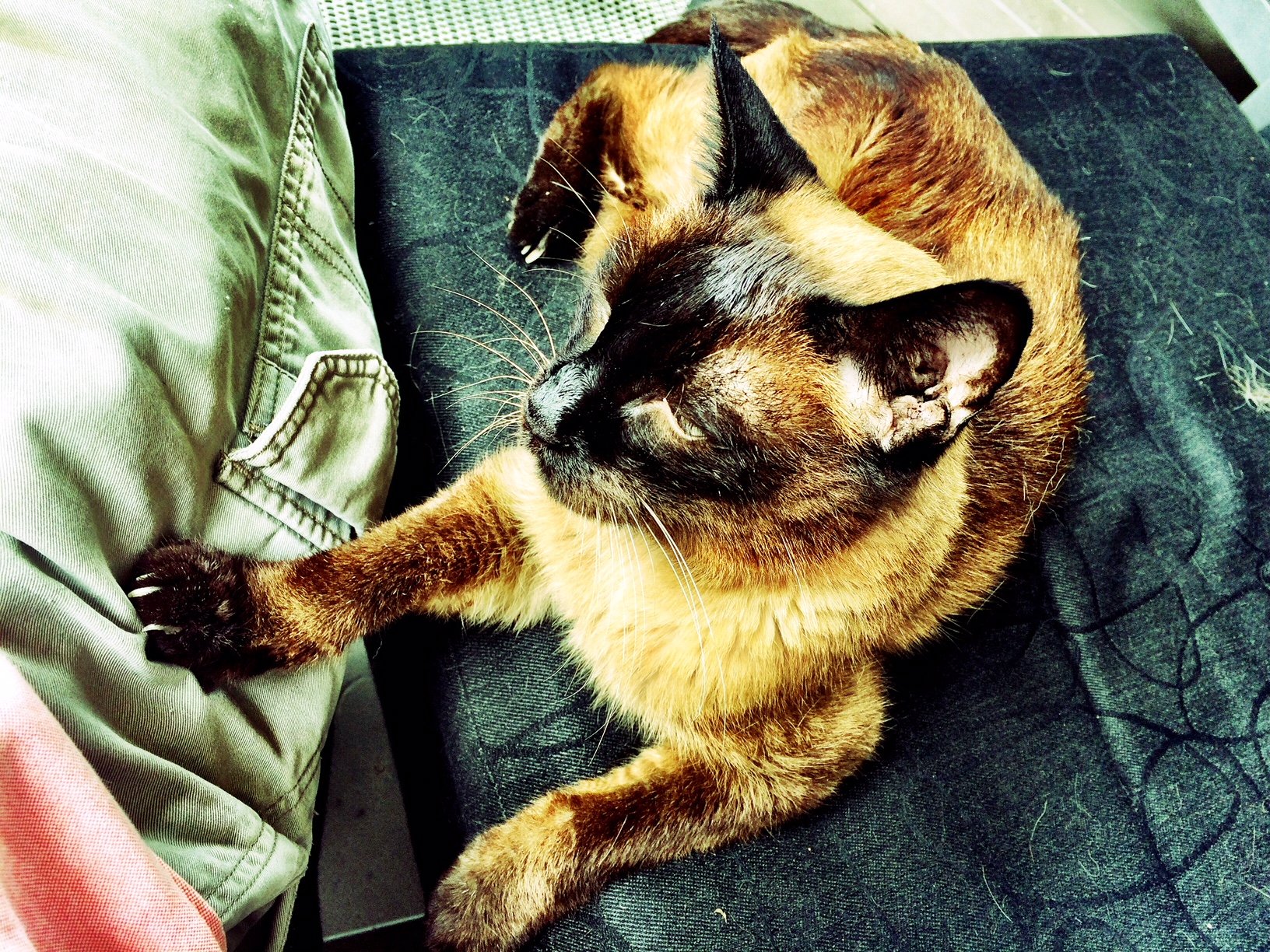 Rio The Half Cat on her final walkabout.

She’s gone. She retired from her wanderings a few years back and felt it was time wandering around the back…

She retired from her wanderings a few years back and felt it was time wandering around the back yard, sleeping on the bed and looking for a lap to sleep on. and sleeping in. But now she’s gone. She slipped into what I could only assume was a bit of a cat coma. Laying back, sleeping, breathing slowly and no longer purring every time I pet her. She spent a day or so like that and just left.

Rio was, we figure, maybe 19 years old. Pretty old for a cat and probably way over 100 in cat years. I don’t know what the science of all this is but she outlived all her peers. In the last year or so, she started getting pretty wobbly, reminding me of Kathryn Hepburn in On Golden Pond. Voice and walk a little shaky, but still with command and purpose.

We got Rio from a cat breeder out in Fredericksburg somewhere. Marlo was in third grade and we all drove out to a decrepit ranch with a bizarre woman who had a big cage full of kittens. The place creeped us out so we did the deal and drove home with a little kitten.

You may ask, why The Half Cat.

She wasn’t, in fact, only half cat. Although a cat/pterodactyl or say a cat/wombat mix would be interesting. She was 100% cat. We just started calling her Rio The Half Cat because of her decision to wander meant half the time we never knew if she was alive, dead or living with someone else.

There was a big chunk of her life, probably from three to twelve that she would simply take off for a month, or more, at a time. We never knew where she went or if she’d ever come back. She had a cat door and could come and go as she pleased and often that going part would go on half a summer.

And since we live at the edge of a huge wildlife preserve chocked full of creatures that would call her dinner, we just had to always assume the worst.

But the worst never happened to Rio. Our neighborhood is tough on pets. I see missing cat posters on the mailboxes all the time. Fluffy, overfed little housecats are no match for the dozen or so kinds of critters that have to kill every day to survive. Our pets simply sit by the food bowl and whine and they get fed. They don’t have to hunt it down.

In all the years we had Rio, we probably went through a dozen other cats. We eventually just did Craigslist. Gt a black, male cat for $20 and not name him for a year. If he survived that long, we’d name him. I know it sounds terrible but it was logical and kittens are fun. It’s not that we just let them out either. We tried to keep them in the house but with kids running in and out, it’s easy for a cat to slip out for an adventure. Many of those adventures turned out to be their last.

Hell, we had a cat that got out ONCE and never came back.

But Rio. Rio had this world wired. Whatever talents she possessed we may never know, but she was obviously a consummate predator and a really good hider. She would jump down into the storm drains and emerge who knows where. That was her personal subway system and she’d mastered the map.

We got a call from a friend years back to tell us our cat was in their back yard eating a rabbit… And they lived a good mile away across busy streets and lots of wild lands full of snakes, owls, foxes, coyotes, probably cougars and no doubt, the occasional bigfoot.

She did this for years. Vanish for a day that could into two. We’d realize she was gone and start asking When was the last time you saw Rio?” “I dunno, few days back I guess…”

She might be gone for a week, two weeks, a month or more and just show up on the back deck as though nothing had happened. She’d come in, eat her fill, drink up a lot of water and sleep it off. Maybe hang out with us for a month or two or longer, then the call of the wild would kick in again.

That was her life and we just had to accept it.

But I admired the hell out of her. She lived life on her terms. She always had plenty of food and comfort but she’d slip out at night and eat rabbits, rats and mice. Rabbits were her favorite and I’d find hind legs, ears and a curly internal part on the back porch.

Some cats kill for sport and bring in gifts.

Not Rio. She ate and wasn’t about to share with anyone.

But it served her well. She somehow managed to survive Texas summers, days over 100 degrees for months at a time. She’d find food and water and avoid the gangs of coyotes would yip and yelp in the greenbelt behind our house, probably all asking each other where that damned Siamese cat was.

We figured she might have had a deal with them.

Every time we’d get another cat, she’d tell the new kid she had something really cool to show them and hey, follow me down into the greenbelt. Then she’d put her little paws to her mouth and whistle really loud and scamper off to leave the dupe to be the guest of honor at a coyote dinner.

She’s gone. The last few weeks we could see it coming. She stopped eating, would drink if I mixed soft food in with the water and put it right under her nose. She walked little but if I picked her up and held her in my lap, she’d purr and look up at me with her cloudy blue eyes and not have to say a thing.

Pets are curious to me. Why do some animals decide to hang out outside their species. Is there a connection far beyond our simpleton view of “We have souls and they don’t.”

Are they just smart enough to know they’ll get food? Or do they have just as important a soul as we do and all our self-centered fluff is just that.

Whatever it is, it can be wonderful. We gave to Rio her whole life and she gave back. She was never one to gush all over someone, all loving and needy and silly. She had her own life and when she was in the mood, she’d sit in your lap and purr and let you pet her. But she could just as well live in the woods doing whatever the hell she wanted. She shared her life with us and we were honored for the time she gave us. In turn, we always treated her with love and respect.

Now I know hearing about other peoples pets passing is something we all have to suffer through. One can never fully grasp the value or love lost because lets all admit it, one man’s dog in another man’s barking nuisance.

So I’m not expecting a load of “We’re praying for y’all” here.

It’s just that occasionally we encounter a soul from outside our species that deserves our respect.

Rio The Half Cat was one of those.

We’ll miss you Rio. Thank you for sharing your life with us. We hope that wherever you are now, there are lots of plump little bunnies and a sunny place to sleep it off.