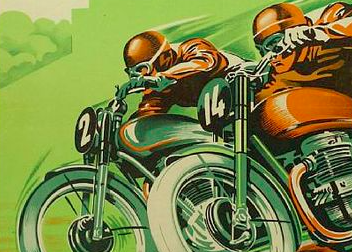 The Edge… A great preamble to an Ad Guy Manifesto.

Hunter S. Thompson could have made a great Ad Guy for one reason. He didn’t play it safe. He knew…

Hunter S. Thompson could have made a great Ad Guy for one reason. He didn’t play it safe. He knew that the only way to break through the constant noise is to make a completely different noise. See what everyone else is doing and not do that.

But that’s a risk.

Taking a risk should be tempered by experience and good judgement. Is it worth it? Personally, I think it is. And the clients who’ve given me the room to work have agreed. It’s all about finding The Edge, and then having the judgement to dial it back… Just a little.

HST wrote this piece as part of a novel about the Hells Angels. It was wedged somewhere in the middle of the book but I’ve always thought it was one of the most powerful things ever written. And it’s the perfect preamble for an Ad Guy Manifesto. Read it and see if you agree…

“So it was always at night, like a werewolf, that I would take the thing out for an honest run down the coast. I would start in Golden Gate park, thinking only to run a few long curves to clear my head…but in a matter of minutes I’d be out at the beach with the sound of the engine in my ears, the surf booming up on the sea wall and a fine empty road stretching all the way down to Santa Cruz…not even a gas station in the whole seventy miles; the only public light along the way is an all-night diner down around Rockaway Beach.

There was no helmet on those nights, no speed limit, and no cooling it down on the curves. the momentary freedom of the park was like one unlucky drink that shoves a wavering alcoholic off the wagon. I would come out of the park near the soccer field and pause for a moment at the stop sign, wondering if I knew anyone parked out there on the midnight humping strip.

The into first gear, forgetting the cars and letting the beast wind out…thirty-five, forty-five… then into second and wailing through the light at Lincoln Way, not worried about green or red signals, but only some other werewolf loony who might be pulling out, too slowly, to start his own run. not many of these … and with three lanes on a wide curve, a bike coming hard has plenty of room to get around almost anything … then into third, the boomer gear, pushing seventy-five and the beginning of a windscream in the ears, a pressure on the eyeballs like diving into water off a high board.

Bent forward, far back on the seat, and a rigid grip on the handlebars as the bike starts jumping and wavering int he wind. Taillights far up ahead coming closer, faster and suddenly—zaaapppp—going up past and leaning down for a curve near the zoo, where the road swings out to sea.
the dunes are flatter here, and on windy days sand blows across the highway, piling up in thick drifts as deadly as any oilslick … instant loss of control, a crashing, cartwheeling slide and maybe one of those two-inch notices in the paper the next day: “An unidentified motorcyclist was killed last night when he failed to negotiate a turn on highway I.”

Indeed… but no sand this time, so the lever goes up into fourth, and now there’s no sound except wind. Screw it all the way over, reach through the handlebars to raise the headlight beam, the needle leans down on a hundred, and the wind-burned eyeballs strain to see down the center line, trying to provide a margin for the reflexes.

But the throttle screwed on there is only the barest margin, and no room at all for mistakes. It has to be done right … and that’s when the strange music starts, when you stretch your luck so far that fear becomes exhilaration and vibrates along your arms. You cane barely see at a hundred; the tears blow back so fast that they vaporize before they get to your ears. the only sounds are the wind and a dull roar floating back from the mufflers. You watch the white line and try to lean with it … howling through a turn to the right, then to the left, and down the long hill to Pacifica… letting off now, watching for cops, but only until the next dark stretch and another few seconds on the edge…the Edge… there is no honest way to explain it because people who really know where it is are the ones who have gone over. the other—the living—are those who pushed their control as far as they felt they could handle it, and then pulled back, or slowed down, or did whatever they had to when it came time to choose between Now and Later.

But the edge is still Out there.”