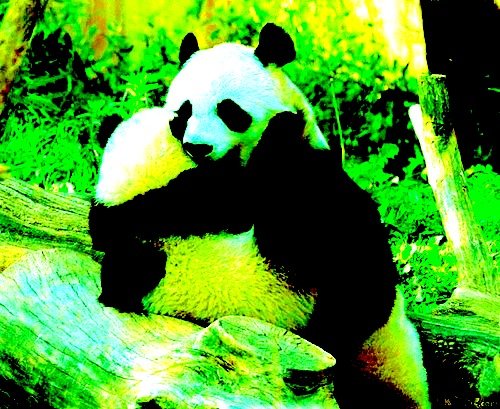 Bear Hugging The Thing… Everything I already knew about advertising I learned in comedy improv class.

I realized a great truth yesterday in improv class. Of course, I’ve always known it but it’d never had such…

I realized a great truth yesterday in improv class. Of course, I’ve always known it but it’d never had such a snappy term.

What the hell does that mean?

Well, in improv it means quickly realizing what the scene is about and embracing it fully. It goes like this.

A couple people get up on a stage and one says something.

That’s called the Opening or the Endowment.

That first thing said should give enough information for the second person to know what’s going on and fully embrace it. If you do a good job, the whole scene will follow along to a natural conclusion and you both get off the stage before any sharks get jumped.

By Bear Hugging The Thing, you both embrace that thing that is central, important, what really matters… And you do everything according to THAT. The better everyone Bear Hugs The Thing, the better the scene will be.

What does this have to do with business and marketing and advertising and communication?

All too often clients get all tangled up in the brambles.

The messaging is a mess.

The Thing was trampled underfoot.

What’s the most important ONE thing that really matters. If I can only say ONE thing about this client/product/service etc, what is it?

It’s in there. That One Thing…

And I guess that if I’ve got any actual talent, it’s in finding The Thing.

I’ve done it all my career. I’ve worked with insanely complex technologies that nobody could really explain… But somehow I found The Thing and brought it out to the light. And any time a client realized I found it and actually bear hugged it, we all won.

It’s a weird talent but every company needs it.

They need someone to find The Thing and hold it up to the light and if everyone can just let go of all the other junk and give it a big bear hug, customers will come.

I really believe it’s the secret to good communication. That’s not to say you can’t and shouldn’t bring up the idea that it comes in 150 colors… That’s in there somewhere and could be important, but make sure your brand and your messaging is wrapped around a singular message.

It’s kind of like the philosophy that goes into making a great billboard.

“Keep removing things till you can’t remove anything else.”

Find it. Bear hug it. Sell more stuff. Thank me some day.